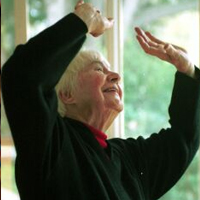 Born in 1912, Zora Semberova is a distinguished dance teacher and former ballerina with the Prague National Theatre.

Aged only 8 she was attached to the  Brno Opera House, later training in Paris and other European centres.

She was the first to dance the role of Juliet to Prokofiev's great ballet score Romeo and Juliet.

She came to Adelaide from Czechoslovakia in 1968 as the Russian tanks rolled into Prague and she became a long-term teacher of dance at Flinders University.

Among her students have been director Scott Hicks and his wife, Kerry Heysen, mime arist Jennifer Hope, Greig Pickhaver - the HG half of Roy and HG - Lord Mayor Michael Harbison and theatre direction Gale Edwards.