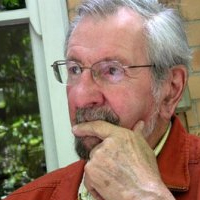 Tristram Cary, 80, is the father of electronic music. He chose Adelaide as his home, but his fame is global.

Son of novelist Joyce Cary, he was serving as a wartime naval radar officer in 1945 when he conceived the idea of electronic and tape music - and became a world pioneer in the field.

In 1967 he founded the electronic music studio at London's Royal College of Music, and was designer/builder of his own electronic music facility, which later largely moved to Adelaide as part of the Adelaide University teaching studio.

He now runs Tristram Cary Creative Music Services continuing to generate extraordinary music for film and concert. In 1991 this sweet-natured giant of music was awarded the Medal of the Order of Australia for services to Australian music.

He is a teacher, performer and composer whose achievements across the musical spectrum have been legion - but, for many, he is still most quickly identified as "the Dr Who man" - the composer of the Dalek music.